People's Fronts on Lula’s arrest: “Resistance is our only option” 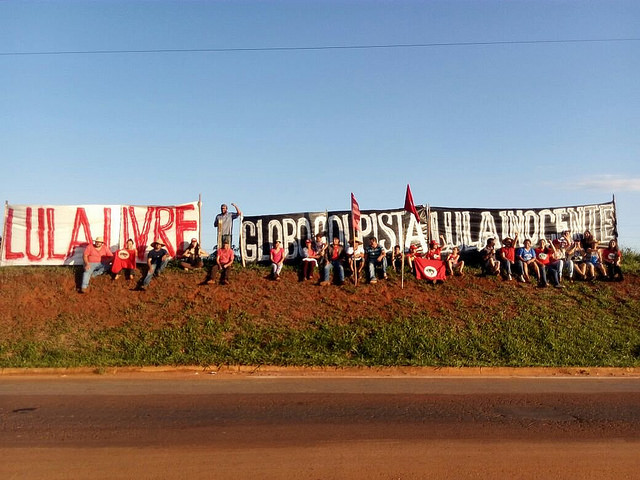 “In face of injustice, we shall not be silent. Against the power of tyranny, the people and the citizens have the right to rebellion" / MST

Two of the main people’s fronts of Brazil, created in 2015 to fight against the coup that removed Dilma Rousseff (Worker’s Party - PT) from office, released a public statement today (6) criticizing the politicization and immorality of Brazil’s justice system regarding Lula’s trial and conviction.

“The only rightful and patriotic response to these aggressions is resistance”, says the document.

The statement “Against the State of Exception, Freedom for Lula!” is signed by the platforms Frente Brasil Popular [Brazil Popular Front], that gathers more than 70 entities and social movements, and by the Frente Povo Sem Medo [Front of People Without Fear], a left wing coalition that unites more than 30 leftist associations.

They argue that the objective of this arrest is to prevent the most popular leader from the working class from participating in the elections. “The right wing block is tearing apart the Constitution of 1988 by recurring to this judicial persecution against the ex-president, so they can implement, with fire and wrath, their anti national, anti people and anti democracy agendas. They have forged a climate of hate and intolerance by giving power to neo fascist groups and pushing forward violence against the social movements and the left”.

“From the historic workers’ Citadel, São Bernardo do Campo, we invoke all the democrats to join our ranks in defense of Lula’s freedom. (…) Roads are being blocked. All the main cities and regions in the country have demonstrations. (…) We call for the organization of people’s committees in defense of democracy and freedom”, claims the statement.

“In face of injustice, we shall not be silent. Against the power of tyranny, the people and the citizens have the right to disobedience and to rebellion”.