Popular culture and the construction of agroecology in the countryside

Popular culture represents resistance, confrontation with the hegemonic model of capital and struggle continues in defense of another cultural and political project for the country. 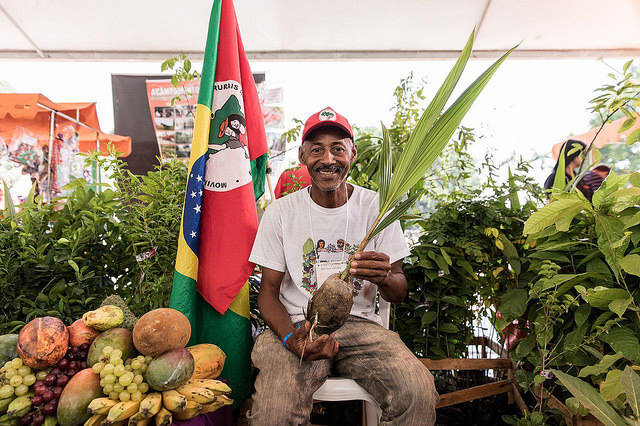 Discussing culture is much more than talking about art. Art is only one aspect of culture, because culture addresses the way of life and the organization of the existence of a people. Culture is also political. For it is only possible to construct a culture within a political-ideological project of society.

Thus, for popular movements of the countryside in Brazil, popular culture represents a form of resistance, confrontation with the hegemonic model of capital and struggle continues in defense of another cultural and political project for the country.

As García-Canclini (1983) points out1, popular cultures are the result of the interaction of social relations, which develop from the material conditions of life of the subjects, in daily life and in material work.

In this sense, Juliana Bonassa, coordinator of the National Collective of Culture of the Landless Rural Workers Movement (MST), emphasizes that the strengthening of culture depends on political struggle and its rooting only occurs through grassroots work with peasants in the countryside. "Culture is the soul and weapon of all the people that struggle. There is no struggle without a political culture that seeks emancipation," Juliana explains2.

d with this, the educational and formative process is fundamental from childhood, to the internalization of more egalitarian and democratic social relations. Combating all forms of oppression and discrimination present in society today, such as machismo, racism, LGBT phobia, among others, rethinking the relations between the various subjects of the countryside and re-signifying popular culture.

In this context, the popular movements of the Brazilian countryside advocate the implantation of another model of agriculture and life on earth, based on agroecological practices and crops, in balance with nature.

Guhur and Toná (2012) ³ indicate that a broader view of agroecology is being debated, developed by popular organizations, which consider it as part of their strategies of struggle and resistance to the agribusiness model and the capitalist system, which exploits the workers and destroys nature.

In the conception of popular movements such as Via Campesina4 and the MST, "agroecology includes: care and defense of life, food production, political and organizational awareness," explain Guhur and Toná (2012, p.64).

Thus, the use of agroecology by the masses in the Brazilian countryside is a political and cultural program that proposes the establishment of new forms of life and the re-signification of cultural practices, aiming at the construction of a popular culture with new social relations between peasants and the nature.

This is due to the development of management practices that respect biodiversity, with the cultivation of polycultures, agroforestry, which develop the diversity of cultures, knowledge, colors, flavors, etc. And they create more balanced relations between the peasants who produce food and the citizens who consume it.

For Silviane Guilherme, a member of the MST's culture sector in Paraná5, this generates a new symbolic and aesthetic dimension in relation to living in rural communities and explains the antagonism of agroecology with agribusiness and popular culture with the cultural industry.

"The relationship of agribusiness is monoculture, a single color, without diversity. This is what we try to combat in agroecology, with the multiplicity of crops, the diversity of colors, other relationships, of those who are in daily life, working, making art. This is related to the production of food, with the land and creates new relationships, an art or a new culture, "says Silviane.

Therefore, the practice of peasants conceives the management of a new popular and political culture in the Brazilian countryside, through another way of producing food, based on a matrix of agroecological production, more conscious in respect to nature.

As well as promoting the rescue of traditional and popular knowledge and the generation of better conditions of living conditions for the subjects of the field, from the processes of organization and political struggle of popular movements.

2 With information from Anderson Moreira (2018). "Culture is the soul and weapon of all the people that fight." Available at: <www.jornadaagroecologia.com.br>.

4 International organization of peasants, small and medium producers, landless, indigenous, migrant and agricultural workers from all over the world. Founded in 1993 in Mons, Belgium, it brings together 150 local and national organizations from 70 countries, located on four continents (Africa, Asia, Europe and America). The main banner is the defense of sustainable agriculture, combating the model of agribusiness and multinationals, social justice and dignity for the peasants. Available at: <www.viacampesina.org>.

5 Interview held during the 17th Agroecology Conference, from June 6 to 9, in Curitiba-PR. Available at: <www.facebook.com/jornadade.agroecologia>.