Rousseff: “The coup that started with my impeachment is a political failure” 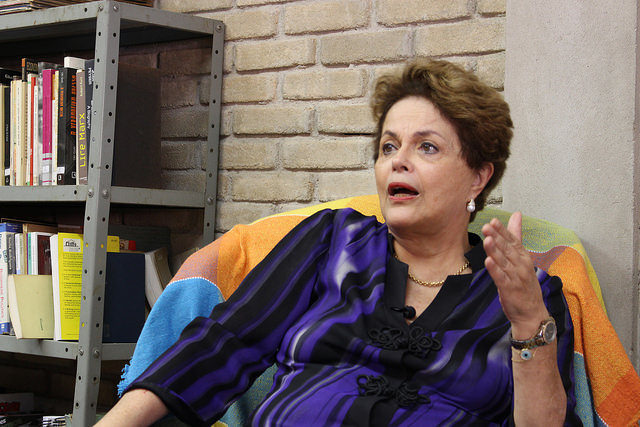 The challenges facing Brazil in the 2018 presidential elections were among the issues addressed by ousted president Dilma Rousseff in an interview to Brasil de Fato, granted in a meaningful location: an education center dedicated to activists from Brazil and the world, the Florestan Fernandes National School, of the Landless Workers’ Movement (Movimento dos Trabalhadores Rurais Sem Terra – MST), a place of resistance in the country today and welcomed Rousseff last Monday (11) for breakfast and a tour of the school’s facilities.

In an assertive tone, Rousseff made a case for the deepening of democracy in Brazil and said she believes the path to achieve that is by electing former president Luiz Inácio Lula da Silva for office in the country’s upcoming elections.

“Lula is the only chance to stop the coup and rebuild democracy in our country. This is the government we want. A government that deepens democracy,” she said.

Brasil de Fato: Madam President, in your opinion, what is the role of people’s movements in elections such as the one we are having this year?

Dilma Rousseff: I believe that, in this election, people’s movements will have greater importance [than they did in previous ones]. Even if we consider that, in the previous [2014] election, they already had decisive, strategic importance, because they helped decide the election, I think now they are even more important.

We didn’t witness an open threat to democracy [back then], and we didn’t have such a sharp conflict as we do today. When you have a sharp conflict, we risk encouraging the right and fascism, because people in Brazil are losing hope.

We are the ones who have to say: no, there is in fact hope. And hope means believing in Brazil, in a deepening of democratic practices.

And what are the necessary matters to address with society right now?

This time, the agenda is clearly about democratizing the media, which is part of the process of deepening democracy. This is not only about having a greater number and more diverse media outlets, but also about fighting against an oligopolistic process, the media cartel that exists in Brazil.

Click the CC button in the player’s bottom toolbar to watch the video with English subtitles.

The second thing I believe to be very important for Brazil is that we have taken many steps toward improving the access to income and more opportunities. I think inequality in Brazil cannot be seen only from an income distribution perspective. It [distribution of income] was and will continue to be crucial. But we also have to address distribution of wealth.

And the third thing that I think is crucial is pension. You have to have pension that ensures a decent living to the people who have worked hard and have grown older and cannot work anymore.

But you cannot do any of that without a tax reform. A tax reform is necessary. We can’t join in the neoliberal conversation that Brazil pays too much taxes. It’s actually the workers who pay too much taxes.

In Brazil, there is an extremely regressive tax structure, which imposes a harsh burden on workers and relieves capital. So we have to start taxing capital.

So there must be an open discussion about tax reform in Brazil. I remember back when there was that whole process before [my] impeachment, when we let [the right-wing’s] traditional argument advance, according to which Brazil pays too much taxes. Whose Brazil? They don’t pay [too much taxes], the banks don’t pay, the big financial, industrial, and agricultural conglomerates don’t pay either.

Do you believe that, if Lula is elected, he could counteract the impacts of the [2016] coup?

I think Lula is crucial today, because he is the only political leader capable of stopping the coup. And it’s not because of him as an individual, but because of his background. His background with social movements, running the country, in the rest of the world.

Lula means our only chance to stop the coup and rebuild our country’s democracy. This is the government we want. A government that deepens democracy, not only in terms of formal rights, but also in terms of actual rights and opportunities. But, more than that, I think there is something else we have to acknowledge: the coup has started, and its first act was [my] impeachment.

And what was this impeachment? It was a blow to movements. It was not just my ousting. It was the ousting of specific policies and an agenda for Brazil. But this impeachment has failed. The coup process that started with the impeachment is a political failure, as there is not one viable coup leader today. It destroyed itself. The PSDB [Brazilian Social Democracy Party] and the PMDB [Brazilian Democratic Movement] have crumbled and now they have no [viable] candidates.

Every country has its monsters, and our monster is neoliberalism, financialization, and slavery, which have established a brutal form of social control and privilege, along with marginalization [promoted by the coup].

What happens is that Lula represents the possibility of putting Brazil back on track, and this is why they imprisoned him. We know he didn't commit any crimes, and there is no legal basis for it [his prison]. We know convicting him means exactly that – an answer to their failed coup, to their political failure.

They’ve had some victories – when they passed the cap on public spending, the labor reform, the outsourcing law, and when they started to sell Petrobras bit by bit, but they can’t continue this process. And that is the deadlock Brazil is living right now.

This is why we fought throughout the [impeachment] proceedings to call it a coup, to say it’s a process that would not end after I was impeached, and that it would continue. And this process is clear with Lula. He can stop this. This is why we will go all the way.