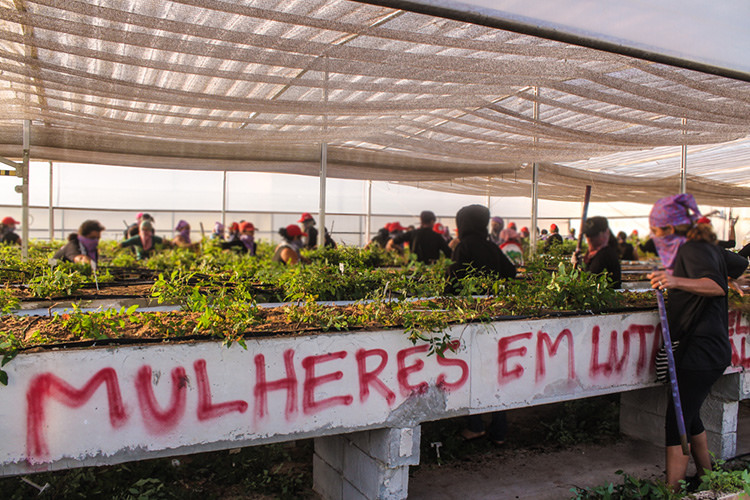 After two synchronized actions aimed at preventing the National Biotechnology Committee (CTNBio) from voting on the legalization of genetically modified eucalyptus in Brazil, the social movements involved feel they have won a small victory.

While 1000 women of the MST occupied a site of the Suzano/Futura Gene company in Itapetininga, Sao Paulo, where new species of genetically modified eucalyptus are being tested, another 300 peasants of Via Campesina interrupted the CTNBio meeting in Brasília.

The actions, which took place thursday morning (March 5th), are part of the national program of the rural women’s struggle.

For Atiliana Brunetto from the MST’s national coordination team, it is a partial victory, because at any moment within the next 30 days the committee may hold another meeting to again take up the issue.

“What is most important is that we managed to make this a public debate. If we had not taken action, probably the cultivation of genetically modified eucalyptus would have been legalized without society even noticing, and the whole population would pay the price”, she says.

Another issue raised by the social movements is the responsibility and nature of the CTNBio itself. According to Atiliana, the composition of the committee, which is made up of various scientists and academics linked to the companies that develop this type of technology, is worrying.

The social movements accuse the majority of CTNBio members of uncritically accepting research done by companies defending transgenics, forgetting the grave political, social and environmental consequences of their decisions.

According to Atiliana, more actions by the rural women are on the agenda, aimed at denouncing the negative effects of agribusiness and presenting an alternative to this agricultural model, based in agroecological production.

Concerning the vote on genetically modified eucalyptus, the MST representative says that the rural social movements are closely watching the next steps of the committee, and are ready to act again if necessary.

According to various specialists in the field, a possible legalization of the cultivation of genetically modified eucalyptus could have serious environmental and social impacts.

Another concern is water consumption. Eucalyptus trees already take up 30 liters of water per day, which is causing a drought north of Espírito Santo and south of Bahia. The genetically modified Eucalyptus will consume even more water during its first years of growth, and while currently Eucalyptus is harvested every seven years, the harvest of this new plant for industrial use will take place every five.

In addition, transgenic eucalyptus requires enormous amounts of agro-toxins. One of the pesticides most used in Eucalyptus plantations is sulfluramid, which is extremely carcinogenic and is prohibited by the Stockholm Convention, which was signed by Brazil and more than 152 other countries.