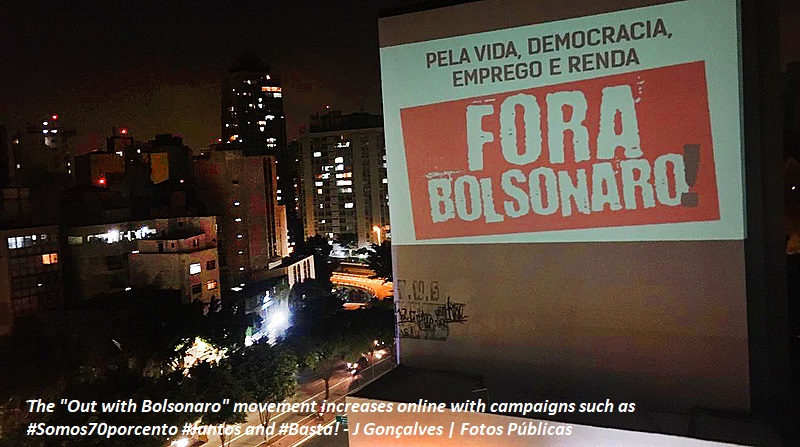 In the last three days, demonstrations in defense of democracy and against Jair Bolsonaro's administration have intensified. Protests occupied the Internet, as well as the streets, criticizing the far-right president’s leadership - especially during the COVID-19 pandemic - and threats to the country's democratic institutions.

Amid the demonstrations, the movement #Somos70porcent (Brazilian Portuguese for "We are 70 percent"), led by economist Eduardo Moreira, has gained attention and popular support since Saturday (30), one day before soccer fan organizations took the streets of São Paulo, Rio de Janeiro, and Porto Alegre. The hashtag, which was the third most trending one on Twitter, references the percentage of Brazilians who considers Bolsonaro's administration terrible/bad or regular, according to a Datafolha survey.

The campaign's idea is to "make it click," according to Moreira during an interview for Brasil de Fato, since Bolsonaro supporters are a minority, reaching only 30%.

Datafolha's survey was conducted on May 25 and 26, a period in which the impact of Bolsonaro’s statements in the April 22 ministry meeting were already evident. The results show that 43% of Brazilians consider the government either bad or terrible, while the previous polling had shown 39.5%. The percentage of people that considers the government to be just regular has also dropped from 26% to 22%.

According to Datafolha's track record, Bolsonaro has the worst approval rating of any president since 1989 at this point in the first term. Fernando Collor had 41% of rejection almost during the same period, after one and a half years in office.

In addition to reaching a record-level of rejection, the president has already seen the number of those calling for his resignation or impeachment growing in just over a month and a half. According to Datafolha, from the beginning of April onwards, those who think he should not resign fell from 59% to 50%, while those who think they should rose from 37% to 48%.

The rejection of Bolsonaro's management of the COVID-19 crisis reaches 50%, while approval is at 27%. The phrase spoken at the April 22 ministry meeting by the president, on the distribution of guns to the "population", is disapproved by 72%.

Moreira explains that the 70% movement is intended to make people “wake up to the power they have and cannot see.” According to him, there is a government-funded machine to prevent people from seeing what they really are capable of and their size.

“There is this story of when an elephant is small in a circus, you tie it to a rope in a wooden stump and it can't get out, when he grows, you can still tie it with the same stump and it won't try to get out, because it doesn’t know its size. So, look at our size, are we going to let a rope tie us to the stump that is Bolsonaro? Let's get the stump off the floor and set ourselves free. That is the idea of 70%,” he declares.

For Eduardo Moreira, the percentage of the population that supports Bolsonaro and defends ideas such as racism, capitalist exploitation, non-payment of taxes, and the genocide in the favelas has always existed and this is a "structural" minority.

“There have been centuries of efforts creating this society, we cannot change this 30% overnight. We can only change this 30% structurally, changing this way of relating as a group, as a society. Specific support for Bolsonaro may fall or change, but society's support for what Bolsonaro represents is very consolidated at 30%. What we need again is to highlight the 70%'s strength,”says the economist.

The #Somos70porcento campaign keeps growing on its own on the Internet and has joined other initiatives opposing Bolsonaro in the last week. Also on Saturday (May 30), the "Manifesto Estamos Juntos" (Brazilian Portuguese for "We are all Together Manifesto") has circulated, signed by important figures from across the political spectrum, from left to right.

On Sunday (May 31), several of the country's leading newspapers published a full-page manifesto. In the article entitled “Enough!”, Jurists affirm that “Brazil, its institutions and its people cannot continue to be attacked by someone who, democratically elected to the post of President of the Republic, has used the noble office that was conferred on him to ruin with the foundations of our democratic system.”