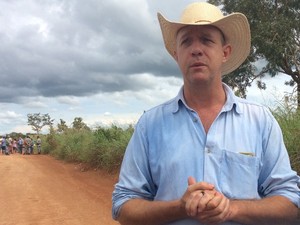 José Valdir Misnerovicz (Valdir) was recently released from prison after being held for months on terrorism charges for leading occupations of land by the MST. Below is his letter of thanks to all of his supporters:

“Freedom, this word that feeds the human dream,   that no one can explain and no one can understand”

Dear friends, militants, comrades! Just a few days ago I got out of prison. Since I gained my freedom, this is my first opportunity to be at the computer. After being received and embraced by many social activists, I am still conditioned to the logic of the prison system, the limits that were imposed, the orders, the negativity of everything. Gradually I am trying to forget this logic, especially the noises behind bars; while assimilating FREEDOM in its content and form.

I am writing to acknowledge the effective presence of each and every one of the militants, friends, comrades and companions along the path of the project.

To all those who came together, risking their own freedom, and supported me on April 14, when they were trying to arrest me at home.

To those who courageously welcomed me and protected in their homes in the communities, as if I were a member of it.

To those who cried out for freedom and justice, struggled, creatively denounced injustice, those who took to the streets and squares against the bourgeois state trying to arrest the cause by holding one guy.

To those who suffered together the agony of the 48 days I was jailed and the 140 days I was imprisoned in the custody center of the Maximum Security Complex in Aparecida de Goiania.

To those who went to visit me and those who were on the waiting list; and by the way, those visits were a huge encouragement for me and caused the system to see me as a different prisoner. This was essential for my safety and physical integrity.

To those who have written messages of support, letters, some containing strong political content that exposed the significance of the prison sentence for the operation and logic that maintains the system. Others were simple messages that spoke from the heart, especially from the Landless, and it was impossible to hold back the tears when I read these.

To those who expressed through prayer in its various forms their anger and hope for justice.

To the activist lawyers who with courage, boldness and determination dedicated hours, probably nights and early mornings, studying defense strategy, preparing the documents to be filed, who intelligently and courageously faced the executioners and tyrants in the courts who at all costs tried to keep us condemned to prison.

To the activists and the organizations and social movements, from the countryside and the city, which make up the Dom Tomás Balduino Human Rights Committee of Goiânia, who took the initiative to create it, a fundamental step in the struggle for my freedom. And that it continues with the challenge of being strengthened to continue the struggle for social justice and freedom of other imprisoned comrades.

To those who continued to struggle, waving the banners of the popular movements and social organizations in the latifúndios [large states], in the squares, in the courts. Each news and piece of information I received from an occupied latifúndio, from a mobilization, gave me strength and renewed hope.

Finally, to all of those who in one way or another participated in the demonstrations, campaigns - national and international - that were organized, those who lived through, suffered, kept on struggling, those who celebrate the even partial win of FREEDOM.

We know that words are not enough to thank each and every one for everything that they did. We know that more than words we need action, practice. That the best way to thank you is to keep fighting, doing more and better work for the cause. This is my commitment that I reaffirm to each and every one, social activists, friends along the path of the project. My main task and commitment is to contribute to the joint release of comrades Luiz and Lázaro.

These months in prison reaffirmed in me more class anger. I know we were not the first and probably will not be the last to be victims of this bourgeois state, of the  latifúndios and of all the forces of capital that represents the project of death. We must defeat them so there is no more injustice, hunger and misery. The massive agrarian reform of a popular character is one of the key measures for the construction of this project for which we dream and fight.

I feel more prepared and excited to continue the struggle, to be a worker in the construction of the project of life in all its dimensions.

To all, my deep gratitude!

An embrace from your friend and comrade,