On a visit to the MST settlement, Lula talks about fighting hunger, solidarity and national sovereignty

For the former president, with the strengthening of policies for family farming, "another Pernambuco is possible" 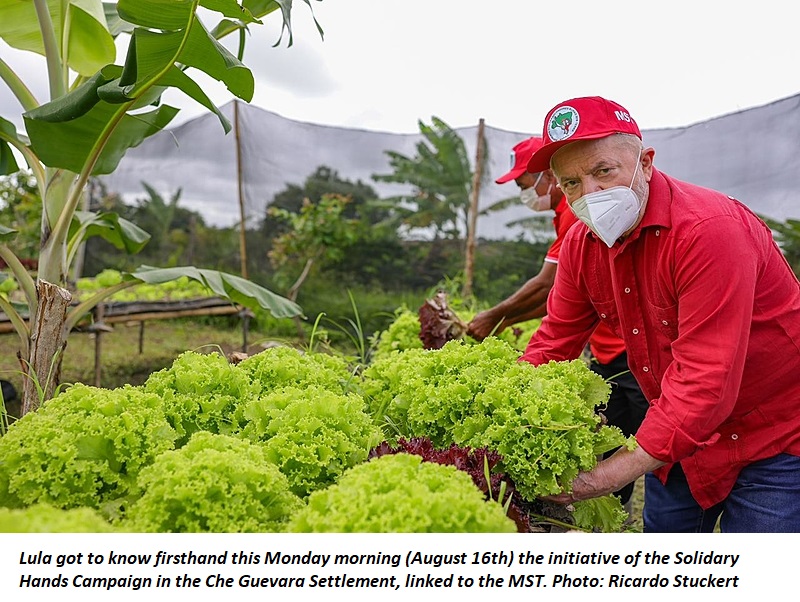 Since Sunday (August 15), former president Luis Inácio Lula da Silva began a visit to six states in the Northeast, starting with the state of Pernambuco. The trip aims to discuss Brazil with local authorities, popular movements and political leaders.

During his visit, Lula got to know firsthand the initiative of the Solidary Hands Campaign in the Che Guevara settlement, in the municipality of Moreno, in the Metropolitan Region of Recife, which has been making food donations to thousands of people from Pernambuco.

Valdilene Maria dos Santos is one of the settlers who produce these foods and president of the Farmers Association of the Che Guevara Settlement, in the municipality of Moreno our settlement. This is another resistance, because we know that he is valuing the work of the farmers by making this visit, we are, everyone, happy,” she says.

In the settlement, Lula met part of the farmers of the Landless Workers Movement (MST), which has guaranteed food on the plates of thousands of vulnerable people from Pernambuco.

However, producers have been suffering from the current government's policies in relation to family farming, as Valdilene says “The relationship today with President Bolsonaro in relation to family farming is none. He doesn't see family farming as a job for farmers, as a means of survival, nothing. With the government of Luiz Inácio Lula da Silva, we were more valued, we accessed letters of credit, there were many things for agriculture. Today we survive on what we have, really,” she explains.

For Lula, the political dispute today “is not an electoral fight, it is not a fight between a man who wants to take the place of another, no. It's a fight for the recovery of the sovereignty of that country,” he said. The passage through the Northeast will also serve to give cohesion to the political articulations of opposition to President Jair Bolsonaro.

The former president's schedule, which began in Pernambuco, should go through another 5 states: Piauí, Maranhão, Ceará, Rio Grande do Norte and Bahia.