Earlier on Thursday (March 3), about 600 women from Via Campesina and other social movements have closed part of Highway Cônego Domênico Rangoni, also known as Piaçaguera-Guaruja, which gives access to the industrial complex of Cubatão on the coast of São Paulo.

With the theme of the struggle against pesticides, the demonstration denounced the negative impacts of improper use of these poisons on the lives of working men and women of the city and countryside and the environment.

At the complex where the women performed the action are major producers of poison, like Bunge, Vale Fertilizantes, Rhodia, a total of 52 companies. Of these, about 80% are producing poisons.

According to World Health Organization, Brazil is the largest consumer of pesticides in the world. In 2009 alone, the country consumed about 790,000 tons of poison.

The state of São Paulo is among the top three pesticide producing states  in Brazil.

The action started around 7 am, when some buses arrived. Then part of the women who were in the bus occupied the highway.

Gradually, the straw hats have multiplied and, ultimately, were among those 600 women, denouncing the evils of the use of pesticides, from the production, use by farmers, to consumption by the Brazilian population.

After one hour of downtime, women held a march back to the bus, chanting slogans, with the prospect that the struggle would not stop just with this act, until they can live in a country with food sovereignty without the use of any type of pesticide. 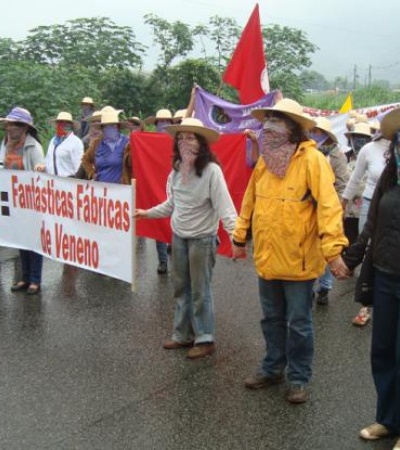