Women of MST occupy Ministry of Agriculture in Brasilia 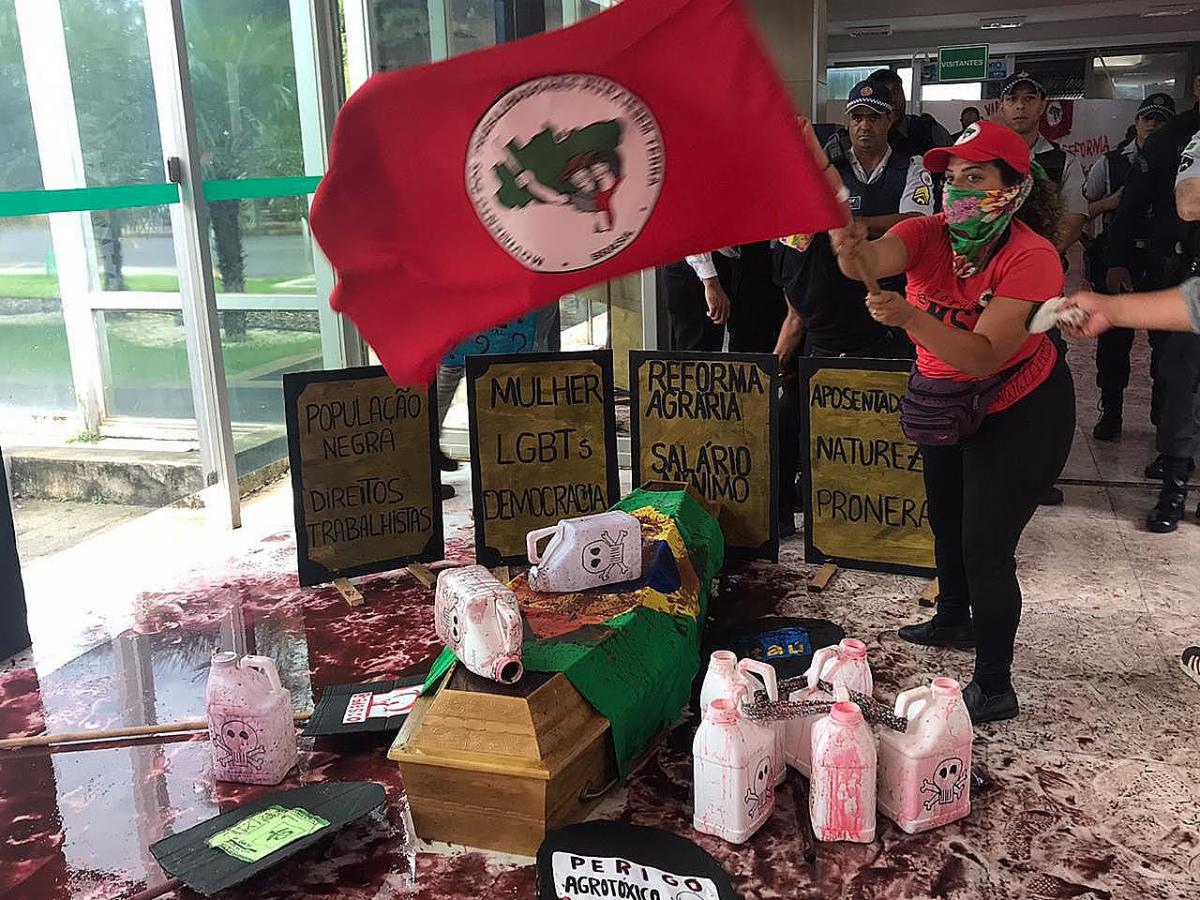 On the morning of Monday March 9, the women of the Landless Rural Workers Movement (MST) occupied the Ministry of Agriculture in the capital Brasilia. 3,500 workers from 24 states in Brazil are participating in the action, which is part of the National Days of Struggle of the Landless Women.

“In anger, in struggle, in defense of our land, of our biodiversity, of the rights won by the working class, we denounce the deadly and destructive alliance between the Bolsonaro government and imperialist international capital that has produced violence,” yelled the landless women when they occupied the building in the Ministries Esplanade.

During the action, the workers denounced the distribution of individual titles for plots of land destined as settlements of agrarian reform and characterized the so-called land-titling process as privatization of the areas. Among the grievances expressed by the participants in the protest are the cuts in public investment and the unchecked release of agro-toxins (pesticides) by the Bolsonaro government.

With regards to the distribution of individual titles on plots of land for people living in settlements, they believe that the action regularizes the selling of plots of agrarian reform land. It also passes responsibility to the National Institute of Colonization and Land Reform (INCRA) for the collective areas of the settlements, where the schools and centers of political education organized by the MST are located.

“Despite the efforts of the current government to hide the failure of the economy, Brazilians feel the drop in public investment that between 2012 and 2014 surpassed R$66 billion, and now in 2020 its predicted to be less than R$20 billion. In this context, unemployment has multiplied the number of discouraged people, without homes and without food, so much so that Brazil has returned to the Hunger Map, a study done by the Food and Agriculture Organization of the United Nations (FAO),” the MST reported in a press release.

According to the Ministry of Agriculture, 474 agro-toxins were released in 201, the highest number in the last 15 years.

“Beyond this, the policies of agrarian reform were decimated by measures like the Decree 10.252 that downsizes the structure of the National Institute of Colonization and Agrarian Reform (INCRA),” says the MST. The decree ends the National Program of Education of the Agrarian Reform (Pronera), the program Land Sun and other programs that gave incentives to people living on settlements, Quilombolas and self sustaining communities.

The Program of Food Acquisition (PAA) is headed in the same direction. Last year, the value of the budget executed by the PAA with resources of the Ministry of Citizens was R$188 million. For the period that just began, the forecast is R$101 million.

“Besides this, the Bolsonaro government is determined to privatize land and promote environmental devastation. An example is the MP 901/19 that, in practice, would exclude from environmental protection the 4,745 hectares of flora of the states of Amapá and Roraima and open these areas up to mining. The so called MP of Land-grabbing (MP 910/19) would make the rules about the agrarian regularization more flexible, giving up to 2500 acres of Union land at a symbolic 10% of their worth to illegal settlers, who are criminally land-grabbing in order to take ownership of these lands”, the MST points out.

This past Friday (March 6), the Federal Prosecutors Board of Citizens’ Rights (PFDC), asked the Ministry of Agriculture, Grazing and Supplies (Mapa), for information on what is being done to assure the upkeep of the human, budgetary, and structural resources needed to run the National Land Reform Educational Program (Pronera).

In the document to minister Tereza Cristina, the PFDC points out that there is currently enormous lack of faith towards the administrative body responsible for the National Land Reform Educational Program. She highlights that in the terms of Decree 9.667 – published in January of 2019 and revoked by Decree 10.253 of February 2020 - it is the Ministry’s duty to “promote rural education applicable to the development of family agriculture”.

“In article 214 of the Federal Constitution, education must be organized in 10 year plans precisely to guarantee the planning - and consequently the allocating of human, structural and budgetary resources - and ensure continuity”, affirms the document, signed by Federal Prosecutor for Citizens’ Rights, Deborah Duprat.

The National Land Reform Educational Program is a public policy established in, and uninterrupted since 1998, currently ratified by Law 11.947/2009. The initiative seeks the democratization of access to education for youth and adults, as well as the training of educators for rural schools, and technical professional training at the undergraduate as well as graduate level, home schooling and post-graduate degrees.

Between 1998 and 2011, Pronera helped more than 164 thousand rural students. Data from the 2nd National Research on Land Reform Education, done in 2015 by the Applied Economic Research Center (Ipea), shows that the program promoted more than 320 courses, through 82 educational institutions in over 880 municipalities, in all states of the nation.

The protest marked the end of the National MST Women’s Meeting, taking place in Brasilia since last Thursday (5).

“We discussed land issues, our mass rural feminism, we shared experiences, got to know the diversity of this country, ending in the best way possible with this beautiful struggle of landless women, sending a message to society that we have to stand up to this government, hammer away at these policies, which is the politics of death, we defend life, and that’s the message we are sending here today”, highlights Mafort.

Atiliana Brunneto, national coordinator of MST’s gender issues department, states that this mobilization of women is the fruit of an organizational process spanning the last five years.

“It’s been five years since the comrades and ourselves have been expanding this process of organizing, of fighting from the perspective of women’s issues, of exposing the question of violence against women. The MST is not removed from this society, which has the capitalist stigma. We want to say enough. I hope to see the day where we can say there is no violence against women in our territories. We really wish we could say that. In this sense, we will keep fighting to guarantee respect, equality, solidarity with women and with the population as a whole”, says Brunetto.